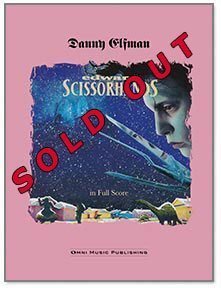 The genesis of Edward is a long story. Essentially it went like this:

I had transcribed every tune from an Oscar Peterson album from 1970, called “Tracks.” It represented a period of probably 5 years of me doing some serious takedown work to build up my jazz chops. The idea just popped into my head one day that I should seek a publisher. Hal Leonard was impressed and offered to pay me for the files to use in a book that would be distributed by them. Concurrently, I had transcribed an album of Christmas music by the versatile jazz pianist, Dave McKenna. That was the first book I offered through Omni Music Publishing. It’s where I learned about publishing, licensing, printing, web design, etc. It was also during this time while working at Universal studios in the music library that I was able to attend many recording sessions, particularly films scored by Danny Elfman. I engraved the main title to Batman and gave that to him. I took it as a challenge to track down the whole score and photocopy it, giving it to him as a present, after he insisted the original scores were lost. It then occurred to me I should tackle engraving an entire score of his and try selling it, like the McKenna book. If he were to see the finished product, he might be more inclined to agree.  I knew Edward Scissorhands was a personal favorite, and his main orchestrator, Steve Bartek, had the scores on hand. It took a couple months, but it was finally finished.  When I presented it to him, as a gift wrapped in paper, he looked at it with such a puzzled look. He asked, “What is this? Where did you get this?” He was so thrilled to see one of his scores completely engraved in book form. I told him I made it, and he still looked so shocked.

I originally sent out an email letting many of my musician friends and coworkers know about this new endeavor, and word quickly spread. Composers were hungry for full orchestral film scores for studying. I only had 100 books printed initially, underestimating its popularity. When it came time to request permission to print more, Fox studios said I was no longer able to make requests, without a clear explanation of why.